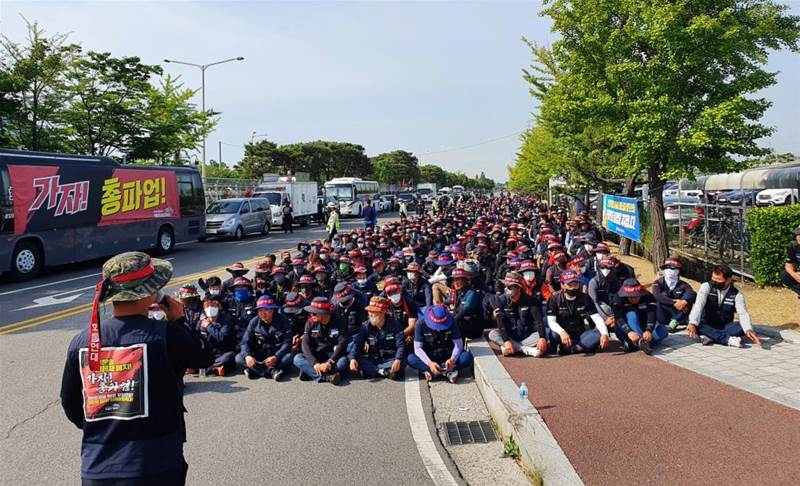 A week-long strike by truck drivers in South Korea has disrupted shipments to China of a key cleaning agent used by makers of semiconductor chips, the Korean International Trade Association (KITA) said.

It was the first sign that the strike was affecting the global supply chain of chip production, having already cost South Korean industry more than US$1.2 billion in lost output and unfilled deliveries.

KITA said a Korean company that produces isopropyl alcohol (IPA), a chemical used in the cleaning of chip wafers, faces difficulties in shipping to a Chinese company that in turn supplies wafers to chipmakers.

About 90 tonnes of the material, or a week's worth of shipments, have been delayed, the trade body said in a statement.

It corrected an earlier statement that production had been disrupted, and clarified that the Chinese firm does not supply wafers to Samsung Electronics' chip production operations in China.

Also facing problems because of the strike are IPA shipments by a major South Korean petrochemical company from its plant in the port city of Yeosu.

Only an "essential amount" is being let through, said a person familiar with the matter, who sought anonymity and declined to identify the company because of the sensitivity of the matter.

The company's output of IPA is used as an industrial cleaning agent in semiconductors and liquid crystal displays (LCD) among other applications, it said on its website.

The truckers' union, which is protesting against soaring fuel prices and demanding guarantees of minimum pay, vowed to continue the strike after four rounds of talks with the government have failed to find a resolution.

In a statement on Tuesday, it also condemned the transport ministry for being "neither willing to talk nor capable of resolving the current situation".

Analysts expect the strike impact on domestic chipmakers to be limited, however, saying that both Samsung and the world's second-largest memory chip maker, SK Hynix, usually keep on hand three months or more of inventory for materials.

Small business owners voiced concern about the havoc a lengthy strike could deal with recovery from the Covid-19 pandemic, as the truckers had launched their action less than two months after social distancing norms were lifted.

"Small business owners are waiting helplessly," a dozen lobby groups for small businesses said in a joint statement, adding that shipments of liquor, food, farm and fisheries products had been blocked.