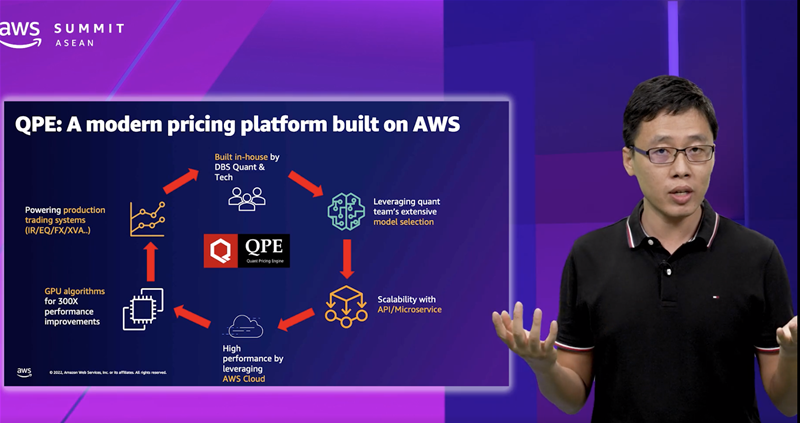 DBS Bank has credited its use of AWS cloud, in place of an on-premises high performance compute (HPC) environment, for its ability to meet the evolving needs of quant traders and risk controllers.

Gengpu Liu, executive director of quant and tech modelling in DBS’ Treasury & Markets (T&M) business, told the AWS Summit Asean 2022 that the bank’s use of AWS cloud “for years” had led to “high performance and cost savings” in its trading operations.

Quant - short for quantitative trading, uses algorithms “based on … mathematical models to identify and capitalise on available trading opportunities,” according to Investopedia.

Liu - who has been with DBS since 2006 - said his team had spent “past decades” building “complex maths models for the pricing and risk management of structured products, which requires a lot of computing capacity by nature.”

Structured products, DBS says on its website, are “financial instruments whose performance or value is linked to that of an underlying asset, product, or index. These may include market indices, individual or baskets of stocks, bonds, commodities, currencies, interest rates or a mix of these.

“Because of their huge variety, there is no simple definition—or uniform formula to calculate the risk and payoff—of structured products.”

Liu said that limitations with an on-premises HPC environment had traditionally constrained his team’s ability “to satisfy customers and the traders’ pricing needs.”

He said the time needed to provision new infrastructure and the maintenance costs of an on-premises environment were barriers.

“It’s [also] difficult for me to access the latest hardware or software as the bank controls on-prem very tightly,” he said.

“With all these limitations, we partnered with AWS to create completely new solutions to support DBS's growing business needs.”

Liu said that running HPC on AWS gave DBS’ quant team access to “many server types, including the latest GPU” based instances.

“When we have huge job loads to process, AWS can give us tens of thousands of servers in minutes which is unthinkable with on-prem,” he continued.

Liu showed off a scaling chart for a single pricing engine; the infrastructure “scaled up to around 5000 CPUs when there are huge loads pending, and scaled down to a minimum when everything [was] completed.”

Liu also used his presentation to offer “a glimpse of [a] new pricing engine we’ve built on top of AWS” called QPE - which stands for quant pricing engine.

QPE broke cover back in late March when the bank’s group head of trading Jacky Tai touched upon it as part of a broader opinion article on technology-powered trading.

“Coupled with in-house trading systems, we have harvested the power of cloud technology to dramatically improve our customers' price discovery journey and enable our traders to better manage their market risk.”

Liu said that QPE was “built 100 percent inhouse by DBS teams” and that the engine “leverages [the] quant team’s extensive model selection, as over the years my team has already built many, many maths models which can be readily reused.”

QPE’s tech stack comprises REST APIs, “C++ code app to implement pricing models on CPUs and the GPUs”; “Dotnet Core technology to implement pricing engines and APIs”; Redis servers as a fast memory cache for data caching, job queue and message queue; and “Docker containers with AWS ECS [elastic container service] orchestration for scaling and failure recovery, which has been proved to be robust based on our many years experience.” 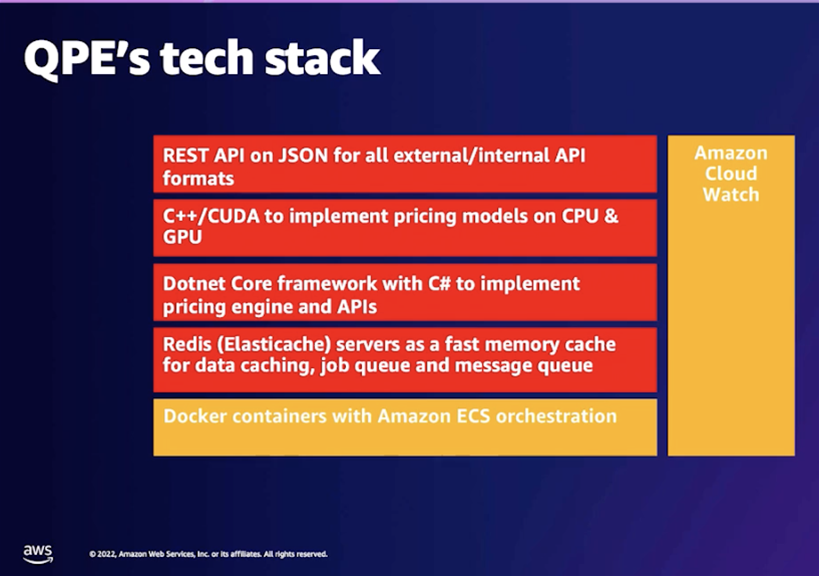