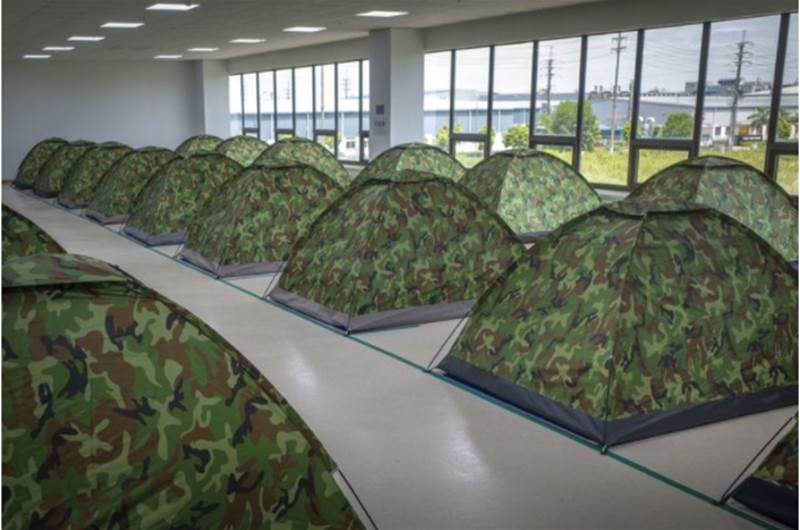 While factories in Vietnam are now open after a period of closure, companies there are taking extraordinary measures to ensure the workforce stay safe from the pandemic.

In the provinces of Bac Ninh and Bac Giang, a manufacturing hub that hosts Apple and Samsung suppliers, 150,000 workers are living on-site temporarily to stop COVID spreading in their factories.

In another manufacturing hub in Ho Chi Minh City, the city’s media centre reported that 22 companies with 25,000 workers have set up sleepover sites for an unspecified number of employees.

Besides the pandemic, manufacturing has also slowed due to the shortage in semiconductor supplies.

Measures seen as necessary but temporary

According to a report from Bloomberg, workers are sleeping on metal bunks with bamboo mats and cots in makeshift dormitories. Others are sleeping in tents pitched on cement floors and are quarantined until they test negative.

“It’s strange to live in a factory and a bit difficult to sleep at first,” quoted the Bloomberg report in an interview with Nguyen Thi Mai, 28, who has been working for a Samsung supplier in Bac Giang for two years. “But my colleagues and I understand that it’s necessary and just temporary.”

In April, a coronavirus surge forced the closure of northern industrial parks that housed Apple suppliers Foxconn and Luxshare. The factories are only allowed to reopen now after strict health precautions were put in place, including strict health and social distancing protocols.

In a statement, Foxconn, which plans to more production of MacBook and iPads to Vietnam, said it is “working closely with the Vietnamese government to ensure that we are able to comply with all relevant public health requirements.”

According to the country’s health ministry, Vietnam has to date only vaccinated about 4% of its population of 98 million.