India IT service providers on a hiring spree as outsourcing surges IT hiring in India is back with a bang. The spurt is being driven by companies cutting costs, migrating to the cloud and embarking on digital transformation.

India’s IT service providers Tata Consultancy Services (TCS), Infosys and Wipro are hiring in significant numbers this year to meet the growing demand for talent that can execute projects offshore for companies looking to digitally transform their businesses.

TCS plans to hire over 40,000 people from campuses this year, while Infosys is likely to recruit another 25,000 people. Wipro, which did not disclose hiring numbers, said it will bring in more people than the previous year.

“Growth itself has picked up and on top of it, most of the growth volumes are happening in India, and there is tremendous demand for talent,” Infosys’ chief operating officer Pravin Rao told analysts in a briefing.

The top four Indian IT firms, including HCL Tech, added about 36,000 employees during the quarter ended December 2020, more than doubling their recruitment in the previous quarter.

According to executives from the companies, the increased hiring comes at the back of a healthy deal pipeline and robust growth momentum projected for the coming months. 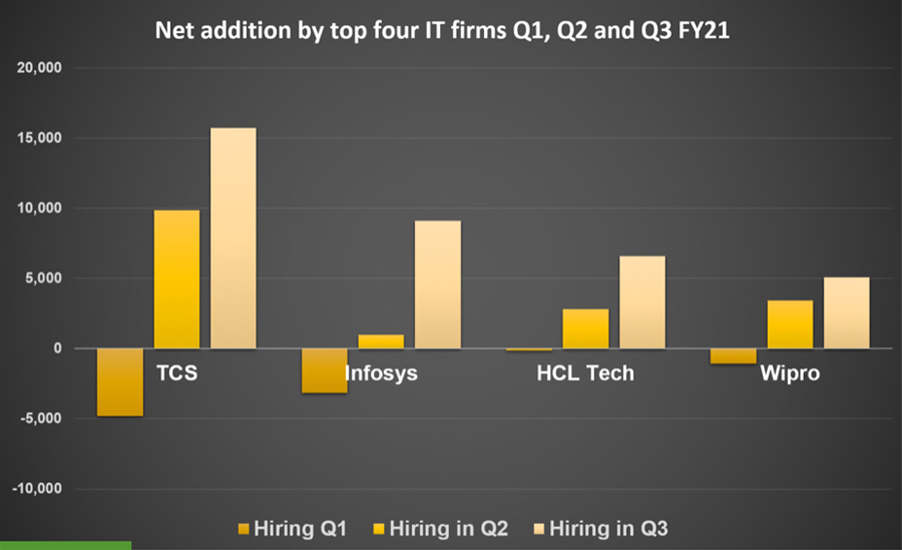 Saurabh Govil, chief human resources officer of Wipro, said it is seeing continued pressure in terms of attrition and has also promised skill-based bonuses for niche skill areas such as cybersecurity, AI and for domain experts.

“The idea is to ring-fence the talent that is critical for our clients. Our campus hiring was 3,000 people this quarter and (it) will be much more robust,” Govil said.

The need for technology services has increased as enterprises across the world migrate to the cloud and invest in digital transformation. This is resulting in a huge demand for cloud architects, data scientists and cybersecurity specialists.

The customers of the IT service providers are also looking to cut costs by consolidating their vendors and increasing IT outsourcing.