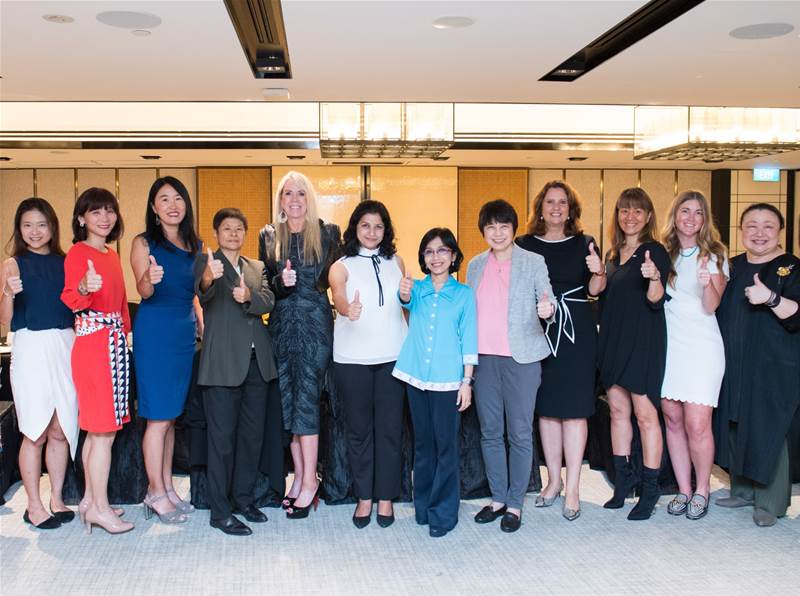 One of the key takeaways emerging from a roundtable organised by iTnews Asia and Okta on how women can prepare to take on new roles in the technology sector and advance their careers was that while women have the skills required to take on any challenge that the IT sector could throw at them, what often holds them back is their confidence and that was partly due to societal conditioning that instil the sense that women could only do certain kinds of jobs.

The consensus among the technology leaders who took part in the roundtable was that there was a need to provide women, particularly young girls who are entering the workforce or are looking to pursue an education in STEM (science, technology, engineering and maths) field, the confidence and mentoring that would instil in them a belief that they could achieve anything they want in their chosen field.

The roundtable was moderated by journalist Grace Chng.

Georgette Tan noted that research done by UWS has shown that girls are “more than competent when it came to STEM-based education and skills but there was an urgent need to bolster their confidence.”

In their interactions, the charity group found that girls looking to follow a STEM education and enter the technology industry want mentors, guidance and counselling “which is why internships or job shadowing really comes to the fore”, Tan said.

There was an urgent need for support (for these girls) from corporates and the community, she said.

Tan added that the sweet spot was to reach out to these girls when they are around 14 years old in order to build their confidence.

She also noted that UWS research shows that girls wanting to study or pursue a career in STEM-related disciplines, like, for example, robotics, do not get the same encouragement from family members as their male siblings do.

Grace Chng quoted a 2020 survey which found that in Southeast Asia women in the tech industry made up about 31 percent of the workforce “which was higher than the global number of 28 percent”.

She noted that for Singapore the number was even better, at 41 percent. Chng, however, noted that the focus should not be “what we have today, rather on the pipeline, we need to attract, develop and retain” women workforce in technology.

Talking about the development of confidence among women working in the technology sector, Tinku Gupta said that confidence came from the first attempt at something challenging.

She noted that women need to step up, raise their hands and take up opportunities that come their way without worrying if they would be successful or not.

Susan St Ledger said that one of the things that she realised from her own career was that there was the need to “be our own best advocate”.

She recalled that during her stint at a multinational company, she was getting regularly promoted and given new challenges.

But at some point, she came to realise that despite the apparent encouragement that she was being given, compared to her male colleagues she was being underpaid.

St Ledger noted that many of the issues of discrimination that women face in the technology workplace stem from a lack of awareness (in society as well as the workplace) rather than deliberate intention.

She recalled an incident from the 1990s.

After working seven years as a computer scientist at US National Security Agency (NSA) when she moved to Sun Microsystems for a pre-sales job, almost everyone who interviewed her felt she would be a great fit for the organisation.

“However, the sales representative said ‘we can’t hire her because she wouldn’t be able to carry the monitors’… luckily everyone else saw beyond that but that is the kind of issue women face,” St Ledger said.

“I didn’t appreciate till later in my life that I was blessed with a gender-neutral upbringing…  Even as I faced my share of discrimination and barriers growing up, and while building my career, feeling at times disheartened, demoralised, incompetent, and even lacking confidence, I could always fall back on strong support from my family and friends,” Cheong said.

She said there was a need to provide a safe environment where women and girls would feel free to speak up. “They should be encouraged to express themselves,” she said.

Marjet Andriesse, shared that when she was growing up in the Netherlands the usual career route for girls in science was to be a doctor and “if you were that smart you would end up in the research lab at Philips or Unilever and do some ‘dorky’ work”.

She recalled that parents, particularly mothers, would say “marry a tech billionaire but don’t become one!”

“We still don’t have a picture of what women in STEM could look like… We need to make it hardwired that being in technology could be sexy and cool,” Andriesse said.

“I see more hybrid roles and if you ask me the future is for hybrid and I would love women and girls to get excited about hybrid work,” she said.

Sun Sun Lim, recalled that one of the first things she did after joining SUTD was to see the connections between the humanities and social sciences and engineering.

“So I introduced digital humanities minor, and design technology in society minor.

“And it's fantastic, because you've got that humanities understanding, and then you power it with the natural language processing and the coding,” she said.

The upside of that, she said, was that “my engineering colleagues were telling me that when they were recruiting students”.

It used to be quite difficult to convince some girls (to join engineering) but then when the teachers were able to show that they also offered “digital humanities”.

And the girls got their “Aha” moment and they started to look at engineering with slightly different lenses, she added.

“I think girls tend to be quite well rounded, you know, you've got multiple interests and so on… and when they see that STEM actually does have those possibilities, that inter-disciplinary outlook and transcends different realms, bodies of knowledge, then it really sort of opens up new possibilities (for the girls),” Lim said.

Talking about confidence building, Chong Yoke Sin, said confidence comes from the experiences that have presented themselves, or that “you have actually made happen because when you look at things that happen, it could be luck or it could be you consciously making those opportunities happen”.

She noted that women technology leaders need to provide sponsorship, not just mentorship, to young women in the workforce and let them understand that they could do any job that they desired.

Sharon Teo said women should doubt themselves less and be more confident to take on STEM and leadership roles.

Societal norms can be improved by featuring more successful cases of supportive spouses, partners, family members and bosses who encourage and give women leaders the peace of mind to grow their careers, Teo added.

Charmain Tan observed that empowering a lady with STEM education could be done through education. “At the end of the day, we have to first identify their interest and talent… We need to not only mentor these ladies but also coach them to be STEM leaders”, she said.

Madhavi Putcha noted that while UWS was trying to impart girls with a lot of tech skills, get them into STEM education and teach them young, “the challenge is that girls are, at some point in time already trained in their mind, for the societal norms”.

The challenge was, she said, women undervalue themselves in the priority chain… “They put themselves right at the end it’s really their family, their children, then parents and their husband”.

There was a need to break out of this she added.

The consensus at the roundtable was that while a lot of progress had been made a lot needed to be done. And women leaders, society and male colleagues all need to do their part to ensure that 50 percent of the global workforce gets the opportunity to shine and do their best.