Will digital documents and e-signatures become de rigueur for businesses in APAC? 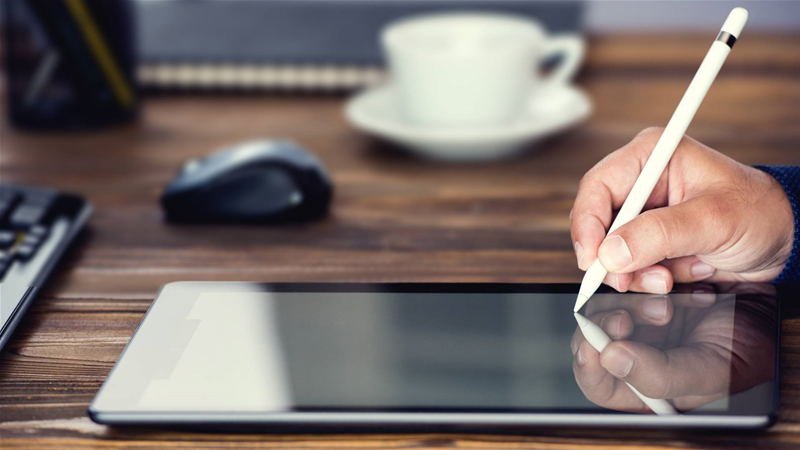 The pandemic has wrought trenchant changes across industries and forced businesses to turn to digitisation, with digital documents becoming key to boosting their work productivity in 2020.

Digital signatures have long been recognised as secure way to verify transactions to support a business going digital in their work processes. Their implementation also offer businesses opportunities to reduce operational costs and improve their digital productivity.

In 2020, digital signatures saw an exponential surge, driven by the pandemic and from increasing online and remote work.

Adobe recently released Digital Insights report found that young people playing an instrumental role in the growth of digital document use and e-signatures in 2020. Increases were seen across all generations as many users e-signed for the first time ever.

Adobe’s report surveyed 4,000 consumers, including over 1,000 from Asia Pacific, about how they used e-signatures following the onset of COVID-19. The research was conducted in December last year.

e-signatures are having a big moment, especially among young consumers; document security important to all generations; and there’s no going back in the year ahead. 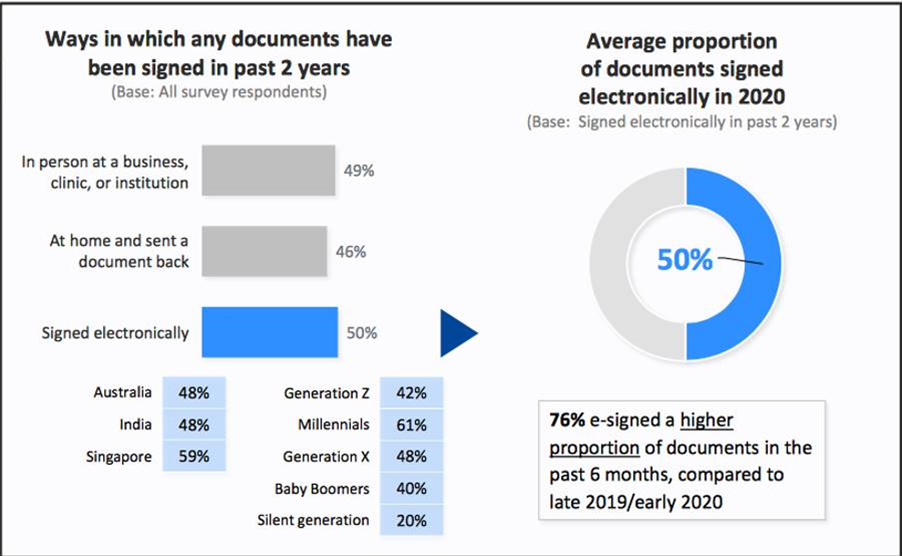 Boost came from the pandemic and millennials

Prior to 2020, e-signatures had started to gain some traction in APAC, but this grew exponentially last year.

Insurance policies (43%) and healthcare registration (38%) were among the most common documents to be e-signed in APAC. While business contracts were the most popular type of document to be e-signed in India (77%), it was less common to e-sign them in Singapore (57%). In Australia, legal agreements had the highest instance of e-signing (76%) whereas it was the least popular type of document to e-sign in India (49%).

Insurance policies and renewal contracts were by far the most popular document to sign digitally in Singapore (81%).

“The global pandemic changed what it means to be productive,” said Simon Dale, Managing Director of Adobe Southeast Asia. “While the shift from paper to digital has been underway since PDF was introduced more than 30 years ago, 2020 was a tipping point. Digital documents have become the currency of business productivity – the centrepiece for how businesses, governments and consumers communicate, collaborate and transact, thereby setting the agenda for the future economy.”

Dale further added, “COVID-19 has brought new urgency to keeping businesses afloat, and we have made it our mission to support their resiliency and reimagine how work gets done in the future.” 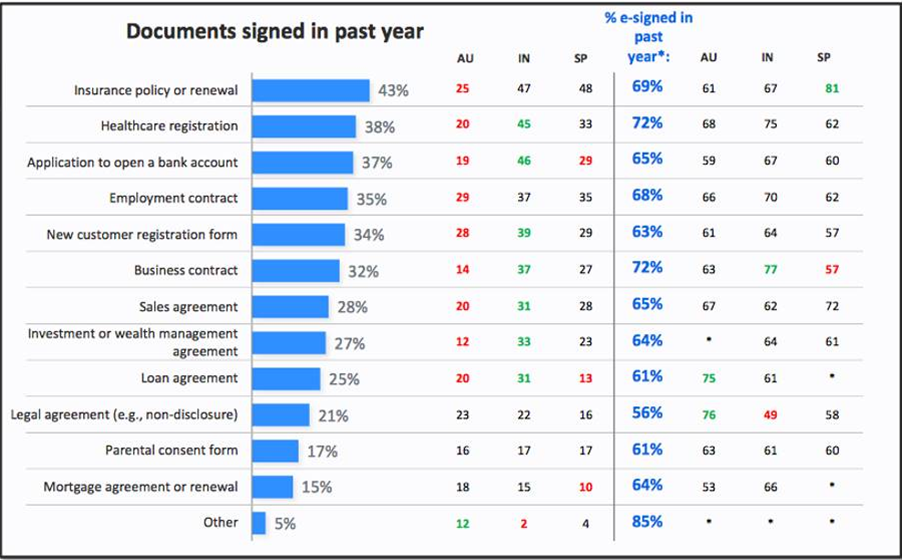 The way respondents e-sign varies between APAC markets. In Australia, the most common method of e-signing consists of typing a name or initials (58 percent) whereas in India (58 percent) and Singapore (54 percent) most respondents uploaded a signature image they had saved on their computer.

Across the region, the markets agreed that checking a box was not deemed an acceptable method for e-signing. In Australia, accepting an e-signature has lower acceptability and is infrequently used.

The pandemic pushed one third of APAC respondents (34%) to exclusively store their data digitally. Additionally, just as many (36%) saved documents both digitally and physically, and indicated feeling safer for having a digital backup of physical documents. Most digital documents were stored on the computer or in the cloud, with cloud storage being most common among Generation Z users (65%).

With the increasing usage of electronic platforms for reducing paperwork, the global digital signature market is projected to advance at a CAGR of 28.6% between 2020 and 2030 and reach US$23.9 million globally, a report by ResearchandMarkets found.

Throughout the forecast period, analyst ResearchandMarkets expects the cloud bifurcation will dominate the digital signature market, as this mode of deployment helps authenticate the documents through a cloud-hosted service, which does away with the need for having a physical platform installed.

Additionally, this deployment mode offers mobility by storing the users' signing key on the cloud, which enables document signing from any internet-connected device.